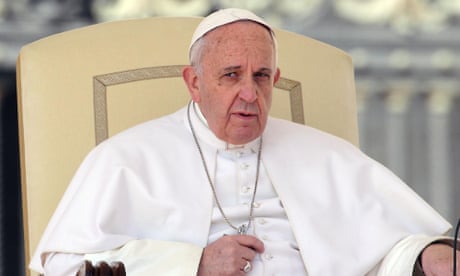 Pope Francis has called for the worldwide abolition of the death penalty, saying the commandment “You shall not kill”  is  absolute and valid for the guilty as well as the innocent.
Using some of his strongest ever words against capital punishment, he also called on  politicians worldwide to make “a courageous and exemplary gesture” by seeking a moratorium on executions during the church’s current holy year, which ends in November.

“I appeal to the consciences of those who govern to reach an international consensus to abolish the death penalty,” he told tens of thousands of people in St Peter’s Square in the Vatican..

“The commandment ‘You shall not kill’ has absolute value and applies to both the innocent and the guilty,” he told the crowd.

The 1.2 billion-strong Catholic church allowed the death penalty in extreme cases for centuries, but the position began to change under the late Pope John Paul, who died in 2005.

The pope added there was now “a growing opposition to the death penalty even for the legitimate defence of society” because modern means existed to “efficiently repress crime without definitively denying the person who committed it the possibility of rehabilitating themselves”.

Francis, who has visited a number of prisons since his election as pope nearly three years ago – the most recent in Mexico last week – also called for conditions to be improved.

“All Christians and men of good will are called on to work not only for the abolition of the death penalty, but also to improve prison conditions so that they respect the human dignity of people who have been deprived of their freedom,” he said.

In the past, the pope also denounced life imprisonment, calling it “a hidden death penalty”. He said more should be done to rehabilitate even the most hardened of criminals.

6 thoughts on “Pope calls for end to death penalty worldwide”

Stories From My Life

A blog reaching out to victims of abuse and others in need, providing insight about abuse, hope for the future, and guidance to see THE LIGHT that lead Secret Angel out of the darkness of her own abusive situation and helped her to not only survive but to overcome.

Our World Vision – thoughts and stories from staff and supporters

inspiration, motivation, and a little sass!

My Path To Walk

A reflection on my walk with God

Writing as life happens one day, feeling, and emotion at a time

Encouraging connection between Christianity and humanity.

Asexuality in A Sexual World

A blog about being asexual in a sex - saturated world

Faith in the Lord

Praise 2 Worship exists to encourage anyone who longs to enter deeply into worship and an understanding of what it means to give Jesus all our praise.

This blog is exactly as described. The Thinking of Thoughts

Kitten's ideas, both good and bad, but mostly insane

Humans versus the natural world.

The greatest blog about faith , music, journalism --- and other things ---- in all the land!

Just trying to ask myself the hard questions and be honest about my answers.

Confessions of a Recovering P.K.

Exploring the Biblical world view, natural healing, and the many joys God has for us

Student journo and blogger; DipJ student at the University of Canterbury; Graduate with First-Class Honours.

Insight-Seeing From Within
Jim Palmer

I Write The Music

Pushing At The Edges Of Creativity

Achieve your goals : Enhance your life

my journey from self-absorption to doxology

The Pharisee in Me

My journey to freedom from pathological piety